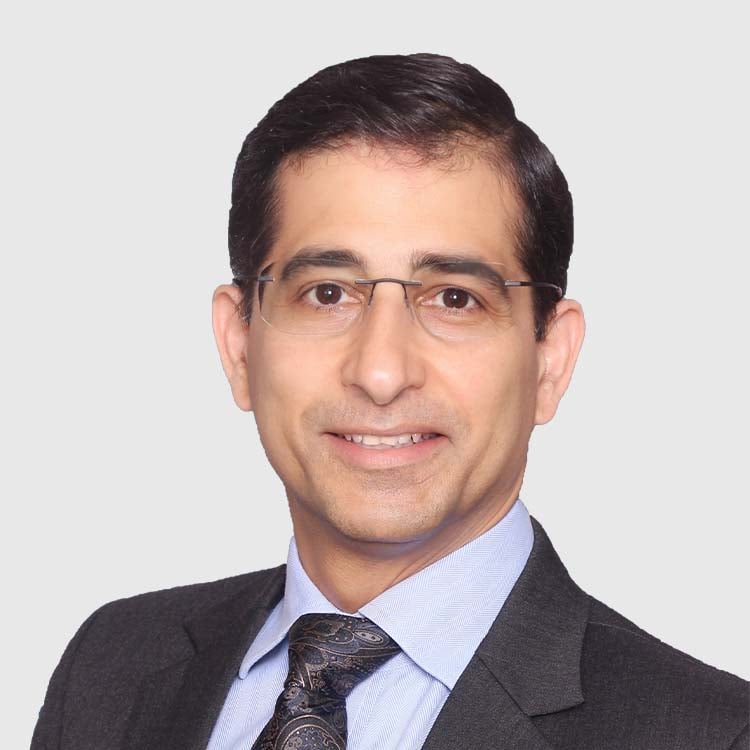 Dinshaw Pardiwala is Head – Centre for Sports Medicine, & Director - Arthroscopy & Shoulder Service at the Kokilaben Dhirubhai Ambani Hosptal, Mumbai, India. He is an ISAKOS committee member, and is on the board of APKASS. He is also an active member of Indian Arthroscopy Association, and Shoulder & Elbow Society of India. He has been on the editorial board of leading arthroscopy journals including Arthroscopy and American Journal of Sports Medicine. Besides being India’s representative at the ICC (International Cricket Council) Medical Committee, he is the board physician for many Indian sports teams. Anecdotally, of the 66 Indian medalists at the 2018 Commonwealth Games, 12 had undergone surgery with him for their sports injuries, and these included 8 gold medals. His work in arthroscopy has been internationally published and recognized and he is the recipient of numerous awards including the most prestigious ISAKOS John Joyce Award in 2009.
Dr. Pardiwala has treated many of India's finest sportspersons such as Olympic medal winner Saina Nehwal, the three medal-winning Phogat cousins, badminton player Parupalli Kashyap, Akhil Kumar the boxer, wrestlers Sushil Kumar and Yogeshwar Dutt, boxer Vikas Krishnan, badminton player P V Sindhu, and rugby captain Hrishi Pendse, He has also treated numerous Indian cricketers and top kabaddi athletes.

Dr. Dinshaw Pardiwala heads the Centre for Sports Medicine at Kokilaben Dhirubhai Ambani Hospital. He is also the Director for the Arthoscopy & Shoulder Service. He has 22 years of experience in this orthopaedic subspecialty and has been working full-time at Kokilaben Hospital since 2008.

At Kokilaben Hospital, he has done a number of pioneering surgeries which include the first Reverse Total Shoulder Replacement in India, first ACI (Autologous Chondrocyte Stem Cell implant) to repair knee cartilage in India, and the first navigation guided arthroscopic ACL reconstruction in India.

He has performed almost 10,000 surgical procedures at Kokilaben Hospital so far.

Having completed his orthopaedic training at King Edward VII Memorial (KEM) Hospital , Mumbai, Dr. Dinshaw Pardiwala has obtained his specialty fellowships in arthroscopy and sports orthopaedics at the finest centres in the US and UK.

Besides being on the medical advisory committee of ICC (International Cricket Council), he is on the medical board of numerous national sports associations.

Dr. Dinshaw Pardiwala has more than 60 international & national publications and book chapters to his credit.

He is faculty at various international & national conferences and has been invited to perform surgical demonstrations in Canada, United Kingdom, Singapore, China, Turkey, Hong Kong, Maldives and Nepal, besides many cities in India.

Mumbai : In the three years that he was bedridden due to painfully swollen knees, Malad resident Mohammed Mustaq Sheikh would never have imagined that one day doctors would 'grow' a new knee for him. But a city doctor has done just that with the help of a cell-based technology available in South Korea.

Sheikh, an electrician by trade, has recently started walking on his own and says he hasn't been "so happy'' in a long time. Most importantly, he says, he can start working again instead of depending on his brother, an AC mechanic, for sustenance.

His 'new knee' was grown from his own cartilage cells.Orthopedic surgeon Dr Dinshaw Pardiwala from Kokilaben Dhirubhai Ambani Hospital in Andheri (W) performed a biopsy on Sheikh's knee late last year and took a few cells from around his damaged cartilage. "The cells were multiplied hundred times over in a laboratory in South Korea over four weeks. The regrown cells were then transplanted back on the injured part of his cartilage on December 30th said Dr. Pardiwala.

Cell therapy could be boon for athletes
A procedure that allows new cells to be grown from cartilage cells could be a boon for sportsmen with torn or damaged cartilage, as well as those who suffer due to drug abuse or traumatic injuries resulting from improper exercising practice. The technique can be used to mend any traumatised joints, be it the knee, hip or shoulders, say doctors at Kokilaben Dhirubhai Ambani Hospital , Andheri.

Besides Malad resident Mohammed Mustaq Sheikh, two other patients have also undergone the autologous chondrocyte implantation/transplantation. "Both are doing extremely well, and we have identified several other patients who want to undergo this treatment,'' said Dr Dinshaw Pardiwala of Ambani Hospital .

The 'cell regrowing' or regenerative technique, which started some 20 years ago, is practised in clinics worldwide, but it's only recently that India has got hold of its latest version. Moreover, a Mumbaibased company called Regenerative Medical Services Pvt Ltd will inaugurate its special laboratory for cell regeneration in Lonavla in June.

"Once our laboratory is operational, it will cost patients only Rs. 1.5 lakh,'' says Satyen Sanghavi of RMS. In the UK and the US , where the technique is commonly used, it costs Rs. 15 lakh.

According to Dr Pardiwala, the USP of the regenerative technique is the fact that it arrests the patient's descent into permanent disability and obviates expensive replacement surgeries."Sheikh would have needed knee replacement if it weren't for this cell therapy,'' he says.