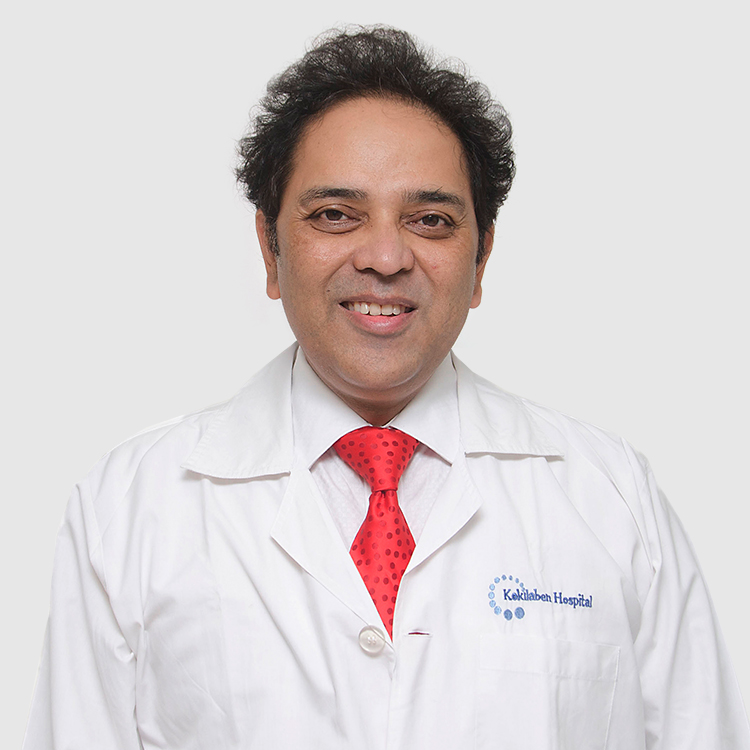 Dr Santanu Sen is an experienced Stem Cell Transplanter and the only internationally accredited BMT unit inspector in India. He started his career in Pediatric Hematology & Oncology in UK and after working there for 12 years, he set up a similar service in Kokilaben Hospital which is now acknowledged to be one of the best in the region. A teacher and examiner for the Royal College of Paediatrics, UK, he has numerous publications, and has been an invited faculty to various national and international conferences. He has been chosen as one of the “Top Doctors in Mumbai” in 2019 and 2020 and consistently strives to provide achieve cure and the best possible care to his patients.

Every life is previous: Childhood Cancer is Curable, & giving up hope is not an option!
A match and chance of cure for every Transplant patient!

At Kokilaben Dhirubhai Ambani Hospital he has treated cases of paediatric cancers including leukemia, lymphoma, brain and other tumours. He is the In Charge of the Paediatric Stem Cell Transplantation program which has to its credit transplanting the smallest baby in the world (transplanted for Neuroblastoma at the age of 4 months) and the youngest thalassemia transplant in India at 9 months. With tie ups with world renowned institutions such as Royal Marsden Hospital in London, Royal Victoria Infirmary in Newcastle and Karolinksa Institute in Sweden he ensures that the latest technology and therapy is available for all his patients.

What is Sickle Cell Disease?

It is a genetic disease that causes severe disability and even death in many patients. The disease causing geneis passed from generation to generation in a pattern of inheritance called autosomal recessive inheritance. This means that both the mother and the father must pass on the defective form of the gene for a child to be affected.

Affected children suffer from anaemia, severe episodes of pain in chest, abdomen or joints, painful swelling of hands and feet, frequent infections, shortening of height, blindness, stroke or even death if not treated properly.

It happened because in sickle cell disease, the red blood cells become rigid and shaped like sickles. These irregularly shaped cells can get stuck in small blood vessels, which slows and blocks blood flow and oxygen to parts of the body.

If only one parent passes defective gene to the child, that child will have the sickle cell trait. Their blood might contain some sickle cells, but they generally don't have symptoms. But they are carriers of the disease, which means they can pass the gene to their children.

It is a disease that causes severe debility and misery. Children suffer severe infections with frequent episodes of severe incapacitating joint pains and even paralysis due to strokes. In fact, in India, one of the ICMR surveys found that 20% of children with sickle cell disease die by the age of 2 years! In some affected areas, 30% of all affected patients die before reaching adulthood!

What is the extent of problem in India?

In India, there is a huge sickle population in parts of Maharashtra, Gujrat, Madhya Pradesh, Chattisgarh, Bihar and some parts of West Bengal, Kerala and Tamil Nadu. Valsad and Nagpur have large population of patients suffering from the disease. It is estimated that upto 40% of the population in the affected regions carry the defective gene. Exact numbers for the disease in India is not know, but is is estimated that worldwide 300,000 children are born every year with sickle cell disease.

What is the treatment?

Treatment includes medicines to reduce pain, blood transfusions to treat the anaemia and antibiotics to treat infections. A Bone Marrow Transplantation offers the only known cure for the disease.

What are the results?

A BMT done early from an unaffected brother or sister who doesn’t have the genetic defect offers an excellent outcome with long term cure. Finding a suitable donor can be a problem as siblings may also be affected and in India finding an unrelated matched donor is very difficult.

Recent advances in BMT has made it possible for patients to have a transplant from brothers and sisters who are not fully matched with the patient. This new type of BMT called Haploidentical BMT offers the chance of a cure for a vast majority of patients.

What about our patient?

Manish Bhoi, a 16-year-old patient, suffered from repeated painful swelling of hands and feel and had multiple admissions for infections, joint swellings and severe headaches. He was diagnosed to have Sickle Cell Disease and even with optimum medical therapy continued to suffer with recurrent painful episodes and repeated hospital admissions. He was also admitted with suspected stroke! In fact, he became so distressed at the prospect of a lifelong battle with the disease that he got severe depression and needed extensive psychiatric therapy.

Understanding that a BMT offered him the only possibility of a cure, we started the process of identifying a suitable donor. HLA typing to identify a suitable match was done for the family, and though his sister was disease free, she unfortunately was only a half-match, as were his parents. A search was initiated to identify any possible fully matched unrelated donors, but unfortunately none were found.

As any further delay would only increase disease related problems and would make a transplant even more complicated, we decided to proceed with a half-matched (Haploidentical) transplant with his sister.

Unfortunately, we found that his sister had very high levels of antibodies directed against her brother’s cells (Donor Specific Antibody – DSA). This makes BMT extremely difficult as there is a high possibility of graft failure. Hence we initiated a novel innovative protocol to reduce the antibody levels before initiating the transplant protocol.

The BMT was done using his sister stem cells and he engrafted early by Day +11. He was kept under close supervision and discharged after a successful transplant.

What is unique about this case?

First successful transplant for Sickle Cell Disease in Western India and that too using a Haploidentical donor.

Previous cases were mostly from Chennai, Delhi and Bangalore and were almost all using a fully matched sibling.

Our BMT program can bring about a paradigm change in the lives of all patients with Sickle Cell Disease.

Naveen(name changed for privacy of patient) was only 1 week old when his doctors told his devastated parents that he has a large tumour in his tummy.

A lot of detailed tests including ultrasonography and CT scan of his abdomen confirmed the suspicion that he has a neuroblastoma, a tumour that originates from the supra-renal gland on top of the kidneys.

Further tests and a biopsy of the tumour showed that though the tumour was limited only to the original site with no distal spread (metastasis), it was positive for ‘Myc-N’, a genetic marker which signifies that it was a very aggressive tumour that needs intensive treatment.

Chemotherapy was started from 1 month of age and he underwent 8 cycles of intensive chemotherapy over the next 3 months and at the age of 5 months had surgery to remove the tumour.

But even this was not enough as this aggressive tumour needs further high dose therapy followed by stem cell transplantation for its treatment.

The problem was that at this young age of 6 months and weighing only 6 kg, a transplant was a difficult proposition and very few institutions has the expertise for such a procedure.

The BMT team at KDAH, which has the significant experience of doing paediatric, transplant was uniquely suited for this difficult task. Dr Santanu Sen, who had extensive experience of paediatric transplants in UK said that the fact that they have a complete multidisciplinary team with full time consultants makes it a safe place for such difficult procedures.

The first major challenge was collecting the stem cells from the patient for the transplant. A special machine called a cell separator is used to centrifuge and filter out the stem cells from the blood but using it on such a small baby was challenging. This was because almost the entire child blood volume had to be cycled very rapidly and constantly through the machine. In fact the machine had to be primed (filled) with a separate blood unit from a donor prior to use as otherwise the childs own blood volume would have been inadequate to even start the machine. In fact the child blood was cycled through the machine once every 10-15 minutes for 6 hours to get enough stem cells for the transplant.

Successful collection of stem was done with no untoward events and a second collection was again done the next day.

This was the first time that such a procedure has been done on such a small child in India and internationally, less than five such cases has been reported in the literature.

The stem cell transplantation was successfully carried out and the child showed signs of recovery within 10 days which also is very early (usual is 14-21 days). In fact the child was discharged in a stable condition on the 18th day after the transplant which also is a record as usually it takes upto 4 weeks before a child is discharged.