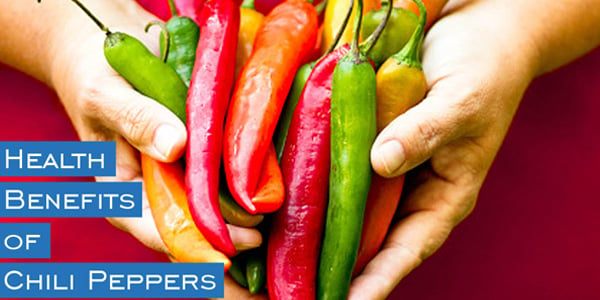 Obesity has emerged as a universal health threat that is linked to heart diseases, diabetes, blood pressure and many serious ailments. In addition to adding a distinctive flavor to Indian food, chillies are accompanied by plenty of health benefits. Let us take a look at some of the most prominent health benefits of Chili peppers:

According to research studies, spicing your meals with chili peppers diminishes appetite which automatically results in less consumption of food, thereby adding less weight to the body.

Chillies contain a substance called ‘Capsaicin’ which is known to boost the metabolic process, reduce negative cholesterol and decrease fatty deposits in the blood stream.

Chili peppers contain high amounts of calcium, which is primarily responsible for bone health. Sufficient intake of chili peppers can provide people who are allergic to dairy products with the same minerals essential to keep their teeth and bones strong.

Reduces sugar levels from the bloodstream

Studies conducted in the past have shown that after consuming meals that were prepared with chili peppers, diabetics needed lower amounts of insulin to regulate their blood sugar levels. This proves the fact that chilies are helpful for diabetes patients and overweight individuals.

Owing to the presence of a substance called ‘Capsaicin’, Chili peppers are known to reduce inflammation and ease joint pain especially the ones that are associated with arthritis. Many medicated creams & lotions that contain high amounts of capsaicin appear to be extremely effective in the treatment of arthritis, back pain and other similar conditions.

Circulation brings blood to our muscles, color to our skin, focus to our brains, and removes toxins and lactic acid. Chillies assist in thinning the bloodstream which promotes better circulation and provides optimum defense against strokes.

For years health professionals have warned people suffering from acid reflux or stomach ulcers to stay away from spicy foods but the findings of recent research studies prove otherwise. ‘Cayenne’ in chillies play an important role in the production of hydrochloric acid which not only promotes digestion but also cuts down on gas/bloatedness and eases stomach aches associated with ulcers.