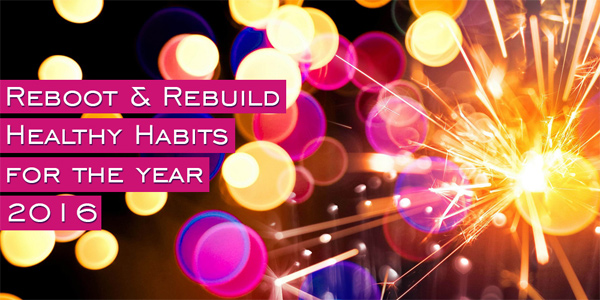 Reboot and Rebuild Healthy Habits for the year 2016

Reboot and Rebuild Healthy Habits for the year 2016

It’s time to bid goodbye to the year 2015 and you’re probably thinking about what you’d like to do differently the next year.

‘New Year’s Resolution’ – this term in itself is enough to increase the anxiety levels of those wish to improve their health but aren’t sure where to start. It is believed that most resolutions are broken by the end of January

Ever wondered why that happens?

Setting up unrealistic goals that is further backed by incorrect strategies to accomplish these goals contributes to the failure of any resolution that you may have made for the upcoming year. Losing weight, getting fitter and making the right food choices are some of the most common health resolutions that are made every year but how many of you actually have the determination to stick to the plan?

If health improvement is on your list of New Year’s resolutions, here are a few simple tips to help you make gradual lifestyle adjustments. Reboot and Rebuild Healthy Habits for the year 2016

It’s that time of the year when people paint the town red with their festive spirit but this is also the time when maximum accident cases and medical emergencies are reported. Christmas and New Year celebrations continue all through the week making the whole world glitzter in lights and magic. In midst of all the celebrations, people sometimes tend to get carried away and indulge in reckless behavior which they often regret later

Regardless of the safety measures that have been undertaken, your night of partying could take an unexpected turn sometimes even without a warning. Act responsibly and always maintain an open line of communication between you and your family/friends. Someone with you should be aware of where you are at all times.

Have a wonderful Christmas and a prosperous New Year

The Air We breathe – Is it Safe?

Breathing the air in Mumbai for just 1 day is equivalent to smoking 100 cigarettes, a study says

In order to have minimal impact on a person’s health, the air quality index has to be between 0 and 50 but as recorded by the meteorological department in Mumbai last month, the air quality index has mounted to dangerously high levels of 225 which can easily increase the susceptibility to respiratory infections in sensitive individuals especially children and the elderly.

The air quality has worsened not only in Mumbai but in Delhi as well. Known for its crisp cold nights, Delhi weather has deteriorated to nothing but grey, smog-filled health nightmare. Pollution levels have escalated considerably over the past few days after both the cities witnessed a certain level of drop in the temperature

According to the World Health Organization, Every year, Air pollution claims millions of lives across the globe, with more than 627,000 deaths reported in India alone. According to a study 1 in every 8 deaths on earth are linked to Air Pollution

Prolonged exposure to high levels of air pollutants can not only cause respiratory disorders in healthy people but also impact those with existing heart and respiratory disorders. Mumbai’s air pollution standards index (PSI) shows that pollution levels rise after the monsoon and peak in December. Laden with toxic substances and cancer-causing particles, the air in Mumbai has become more polluted than the air in Beijing. One of the main causes of this outcome is the increasing number of vehicles on Mumbai’s streets. Motor vehicles emit a host of hazardous pollutants into the air, most of which are capable of causing a significant damage to the human health. Toxic gases emitted from chemical factories and fire crackers have further aggravated the problem of air pollution, thereby creating an unbearable living condition in India

Constant monitoring of Air Quality is absolutely essential to keep a tab on the level of contamination. What’s more…, Educating people and creating awareness about the dangers of Air Pollution can transform the current scenario.

Winter, also referred to as the Flu season is accompanied by a host of illnesses, most of which are easily spread from one person to the other. The most effective way to fight common winter ailments is by eating food items that will help you build healthy cells in the body, in other words help you ‘boost your immunity levels’. Our immune system is like a strong anti-virus device that helps in fighting infection/virus and if it functions well, we will always be disease-free regardless of temperature fluctuations and seasonal change.

Winter, seasonal fruits and vegetables are actually higher in many immune-boosting properties. They are also packed with extra doses of vitamins, minerals and protein.  Fill-up your grocery bag with lots of fresh fruits, veggies and food items that equip the body to fight winter ailments. A strong immune system, safeguards the body from a host of diseases.

On your next visit to the supermarket, make sure you add the fresh versions of these immune boosting foods to your cart

It is estimated that approximately 1,400,000 to 1,600,000 people infected with HIV/AIDS currently reside in India. After South Africa and Nigeria, India is believed to harbor maximum number of HIV infected people in the world. Growing concerns on this issue have resulted in many governmental and non-governmental organizations taking drastic steps to increase awareness about this disease but the general public still continues to be largely ignorant.

One of the biggest hurdles in eradicating HIV/AIDS from our country is the stigma associated with it. HIV and AIDS-related stigma has led to discrimination against people living with this disease thereby restricting their access to better healthcare facilities

Hollywood Actor Charlie Sheen recently came out in the open about his HIV infection. It’s about time people let go of the social stigma and speak more openly about this disease in order to reveal its devastating health effects.

Here are a few lesser known facts about HIV/AIDS

Although HIV and AIDS have become very common it is still surrounded by silence and ignorance. World AIDS Day is a global initiative that encourages communities to take a stand against HIV/AIDS.