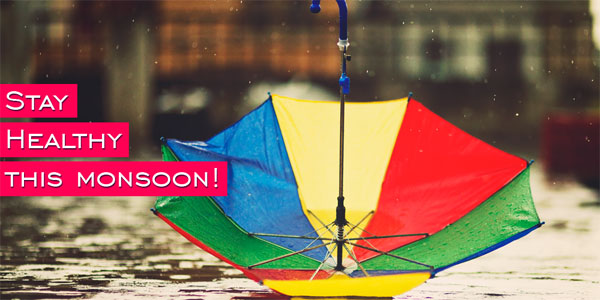 We are happy to welcome the monsoon showers after experiencing the scorching summer heat. But monsoons do bring certain health risks. Our body is more susceptible to health issues in the rainy season as monsoon reduces the immunity power of our body. Our body is more prone to allergies, infections, indigestion problems, so we must keep our body resistant against such diseases.

Some tips to be healthy this rainy season:

So stay healthy this monsoon and enjoy the happy season!

Yoga is a 5,000-year-old physical, mental and spiritual practice having its origin in India. Yoga aims to transform both the body and the mind. Since the last 2 years it has gained importance worldwide thanks to efforts by many leaders.

On December 11 in 2014, the United Nations General Assembly declared June 21st as the International Day of Yoga. This was after Indian Prime Minister, Mr. Narendra Modi suggested making June 21, which is the Summer Solstice as the International Day of Yoga. Yoga will be practised across the world today by people from various religions and ethnic origin.

The word ‘Yoga’ is derived from the Sanskrit root ‘Yuj’, meaning ‘to join’ or ‘to yoke’ or ‘to unite’. As per Yogic scriptures the practice of Yoga leads to the union of individual consciousness with that of the universal consciousness, indicating a perfect harmony between the mind and body.

Pre-Classical Yoga: The beginnings of Yoga were developed by the Indus-Sarasvati civilization in North India over 5,000 years ago. The word yoga was first mentioned in the oldest sacred texts, the Rig Veda.

Classical Yoga: In the pre-classical stage, yoga was a mishmash of various ideas, beliefs and techniques that often conflicted each other. The Classical period is defined by Patanjali’s Yoga-Sûtras, the first systematic presentation of yoga. Patanjali is often considered the father of yoga and his Yoga-Sûtras still strongly influence most styles of modern yoga.

Am sure most of you must be regular yoga practitioners. If not, then start today and make sure to include Yoga as a part of fitness regime.

So the rain gods have given us a glimpse a few days back….but we are all wait patiently for them to return in full form. Aren’t we? We have had enough of the sweltering summer months. And all we look forward to now are the cool breezy monsoon evenings, walks in drizzles and yes the occasional heavy downpours. Sounds wonderful right?

We have all have some great monsoon memories as kids which we still reminisce. And yes, we have many stories also to share. But what about today’s kids? Somehow kids have a lot of restrictions and a different set of rules to follow then elders. Let’s not be over protective and just follow some basic monsoon care for kids. Let them enjoy the rains, splash the puddles and float paper boats, a great way to reclaim their childhood in this tech savvy times.

We agree that along with the monsoon fun comes contaminated water , cold and fever, infections and the occasional flooding . As children have low immunity levels they are more susceptible to these ailments. But a little care can balance the monsoon fun and the health risks.

Here are a few monsoon friendly tips for kids:

So let the rain not dampen your spirits, just a little bit of care and you are rain ready!

All about Brain Tumour

We all know why the brain is so important for us. We are just nothing without our brain. The brain directs the basic things we choose to do (like walking and talking) and the things our body does without thinking (like breathing). The brain is also in charge of our senses -sight, hearing, touch, taste, and smell, memory, emotions, and personality.

Some facts about brain tumours:

Some symptoms of Brain tumours:

Some risk factors for tumours:

There are various treatment options available. The earlier the detection the better are the chances of survival. Many patients opt for surgery, radiation therapy, chemotherapy or a combination of treatments. It is best to consult a specialist who can give correct guidance depending on the type of tumour, size and the age of the patient.