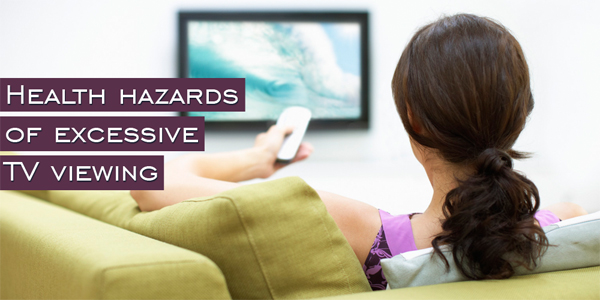 People blame a hectic work schedule for missing out on their daily workout but somehow make time to watch the television every day without fail.

With hundreds of channels featuring a variety of entertainment programs, it has become next to impossible for people to maintain a safe distance from Television. Anything in excess is bad for health and this saying is also applicable to an individual’s TV viewing time.

Experts believe that every hour spent watching television cuts down the viewer’s life by 22 minutes. What’s more…some researchers are also of the view that watching too much TV is as dangerous as smoking

In addition to causing vision-related problems, spending several hours in front of the idiot box makes a person highly vulnerable to cardio-vascular diseases, obesity, diabetes and hypertension – all of which are linked to lack of exercise. With every 2 hours of TV viewed each day, the risk of Diabetes and Obesity is increased by 14% and 23% respectively

Sitting in a certain position for a long time also paves way for spine related problems that often result in acute back ache. While watching television, a person often remains inactive at a stretch for several hours. This puts the body’s metabolic functions on hold. Lack of physical activity causes the lungs & heart to work slowly resulting in very little blood being pumped through the system. This allows fats and cholesterol to build up in the arteries. When this happens, an individual becomes highly susceptible to heart attacks and strokes.

Chronic TV watchers often end up missing out on a lot of sleep and experience extreme fatigue throughout the day.

Television viewing has turned out to be a major sedentary behavior that is threatening the lives of many. Studies conducted on this subject have revealed that watching television in excess can change the structure of a child’s brain in a way that it tends to lower their verbal intelligence

With these findings and Cricket Matches in full swing, it is highly crucial to keep a close watch on the amount of time you and your loved ones spend in front of the Idiot box.