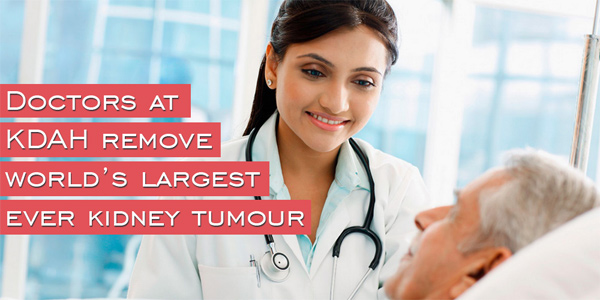 It was a routine patient visit when doctors at KDAH met Arnesh Kumar last December. The patient from Patna had approached our team with complains of severe abdominal pain, weight loss and weakness. He had been unwell for the past six months and was consulting a doctor in Patna. The preliminary tests were already conducted and he was diagnosed a huge malignant tumour in his left kidney. The doctors in Patna refused to operate him as it was a complex surgery to undertake.

Dr TB Yuvaraja, the head of robotic surgery and consultant uro-oncologist and his team successfully operated on the patient on 29th December 2015. It is only now that we have realised that the team at KDAH created a world record of removing the largest tumour (6.9kg) from a patient’s kidney. The earlier record was for 5.018kg. We are in the process of applying for a place in the Guinness Book of World Records. It is a great achievement for Dr. Yuvaraja’s team and we are looking forward for KDAH’s name in the coveted book of records soon.

At times laparoscopy is conducted for tumours but owing to the size it wasn’t possible in this case. The doctors opted for a open surgery. It was a major surgery wherein the doctors blocked the artery to avoid excess bleeding. The diseased kidney had to be removed.

Apart from Guinness Book of World Records KDAH is also planning to send the details of this accomplishment to international and national medical journals. Colleagues from the medical fraternity have also commented on this feat of KDAH. Dr Sujata Patwardhan, head of the department of urology at KEM Hospital, said, “I am not aware about such a big tumour ever being removed.”

We are glad that our team of experts could be of immense help to the patient in his crucial time. Such challenging cases give doctors an opportunity to explore their potential completely. We look forward to serve all patients with utmost care and expertise always.

Thanks for sharing this useful information, It is very useful and who are searching for Hair Transplant