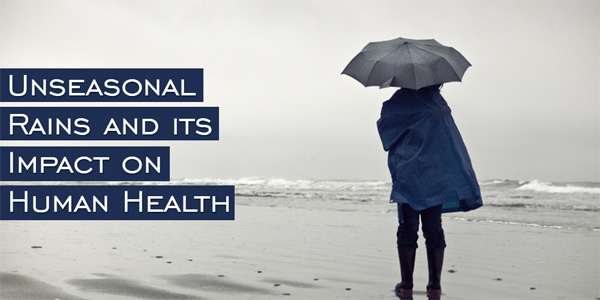 Unseasonal Rains and its Impact on Human Health

Heavy unseasonal rains have been pounding over various parts of Tamil Nadu and neighboring Puducherry causing flood like situation and throwing life out of gear.

Flooding can trigger a host of health issues for the general population, sometimes even resulting in death and injury. Other potential outcomes include contaminated drinking water, dangerous material spills, increased population of disease-carrying insects and bugs, dingy houses, and public disturbance

Mumbai was also caught off-guard when heavy rains lashed in different parts of the city on Saturday, last week. Experts at the weather office have predicted a certain amount of rain showers to continue in different parts of the country. Although these unexpected showers have caused a slight temperature drop, it has also exposed us to a host of illnesses. Unseasonal rainfall caught many regular commuters off guard. With no defense, people had no choice but to get wet in the rains resulting in an increase in the cases of viral fever.

Abrupt climate change impacts our health and wellbeing. It not only worsens several existing diseases and conditions, but also opens the door for new pests and pathogens to enter our environment. Climate change in the form of unseasonal rainfall also affects the air movement and quality thus promoting the growth of airborne allergens and pollution which causes significant damage to the human health. Another aspect of unseasonal rainfall is the damage caused to the crops resulting in food contamination and shortage.

People who are the most affected and highly vulnerable to diseases due to natural climate fluctuations are children, elderly and the ailing population. The underprivileged section of our society is also affected severely as a result of unexpected changes in the temperature levels

Dry climate before the recent spell of unseasonal rainfall can be conducive for virus growth. Experts believe, rapid fluctuation in temperature initiates an influx of virus which triggers upper respiratory infection

What’s more… pollution and water accumulation in potholes caused by heavy rainfall could add to the mosquito menace thus increasing the risk of illnesses like Swine flu, Dengue and Malaria

Since past few years, unexpected climate changes have been occurring at an increasingly rapid rate. Climatic change that shifts from high levels of heat during the day to heavy rainfall at night may make conditions ripe for disease spread. Such changes have to be actively supervised with co-ordinated responses in all aspects of their impacts on human society, including health.