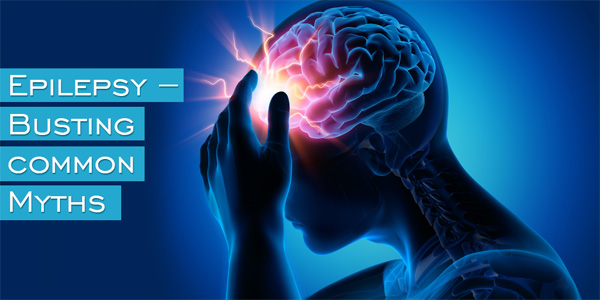 Epilepsy is a medical condition in which a person experiences repeated, unprovoked seizures which is caused by a sporadic, sudden and extreme electrical discharge from cells in the brain.

India is home to an estimated population of 10 million epileptic patients. Atleast 1 out of every 100 or 200 people in India suffers from this neurological disorder. Depending on its kind, Epilepsy affects people in different ways

Treatment options for Epilepsy has progressed immensely since the past decade but the stigma and shame associated with this disorder prevents people from seeing proper medical help. Inspite of being the oldest medical condition on record, Epilepsy has still been kept under wraps and very little has been spoken about this issue on a public platform

Let’s generate awareness by busting some common myths and misconceptions about epilepsy.

Myth – Epilepsy is caused by “evil spirits” or “supernatural powers

Fact – Epilepsy is a neurological disorder hence should be treated by neurologists, epileptologists, physicians and pediatricians.

Myth – Epilepsy has no cure
Fact – Medication, surgery, dietary and/or other therapies have successfully helped in reducing or eliminating seizures in many epileptic patients. With proper treatment approach, most patients can lead full, productive lives.

Myth – Epilepsy is genetic
Fact – Anyone can be diagnosed with Epilepsy at any given point in life. While some people are born with this disease, there are others who are diagnosed with it for no apparent cause. Regardless of your age, sex, ethnicity or financial background, epilepsy can occur unannounced

Myth – Epilepsy affects intelligence
Fact – On average, Epileptic patients have shown to possess the same level of intelligence as a healthy human being. Learning abilities of patients can be affected only if the frequency and intensity of seizures increase

Myth – During a seizure, epileptic patients sometimes swallow their own tongue.
Fact – A person having seizures may end up biting his/her tongue but is simply impossible to swallow the tongue and choke

Myth – If you’ve had a seizure, you have epilepsy
Fact – Not all seizures can be attributed to Epilepsy. Seizures can happen for other reasons, like high temperature, binge drinking, head injury etc. To be diagnosed as a case of epilepsy, the patient must have suffered at least two unprovoked seizures.

Myth – You should force something into the mouth of someone having a seizure
Fact – Please do not put anything into a person’s mouth if he/she is having a seizure as it could cause an injury. During most seizures, the person is unconscious hence incapable of safely handling foreign objects in his/her mouth.