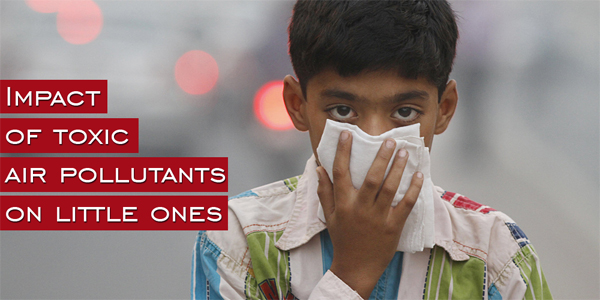 Impact of Toxic Air Pollutants on little ones

Deteriorating air quality in India, especially in cities like Delhi and Mumbai has been a hot topic for discussion since the past few weeks. As per recent reports, Air quality in Delhi improved considerably on Saturday, mainly due to strong winds and sunny conditions.

But what happens when the weather condition comes back to normal?

Will the pollution levels go up again?

The government needs to take permanent measures against increasing levels of air pollution in our country. It is estimated that on an average, a human being breathes 20,000 liters of air each day, which means that the more polluted the air is, the more toxins we inhale into our lungs.

Air pollution affects kids more than adults because they have high respiration rates and inhale far more air in proportion to their body weight as compared to adults. Inhaling polluted air not only puts people at a dangerous risk of respiratory diseases but also cuts down their life span by 1 to 2 years.

What’s more disturbing is the fact that the air that school children in Delhi breathe is four times more toxic than the required safety limit.

Damaged Lungs – While healthy adults at rest breathe in 12 to 16 times in a minute, babies less than a year old inhale 24 to 30 times a minute, toddler under 5 years breathe 20 to 30 times, while children aged between 6 to 12 years do it 12 to 20 times a minute. Since most kids lead an active life and spend far more time outdoors, they end up breathing more pollutants per kg of body weight compared to an adult. Experts believe that short-term ozone exposure not only reduces lung function but also causes breathing problems and lung inflammation in both children and adults. Kids are therefore more prone to suffering lung damage in addition to a host of other illnesses due to polluted air.

Cellular Damage – Together with ozone, sulfur dioxide, sulphate aerosols and suspended particles cause cellular damage to the airways and lungs and impair their function permanently. Sulphur dioxide is also known to constrict the airways, thus resulting in reduced lung cell permeability and development of scar tissue in the lungs. As per recent reports, the air pollution levels in Delhi have put its residents at the highest of risk of lung cancer.

Allergies and Asthma – Approximately 30 million people including children in India suffer from Asthma. Ozone, sulfur dioxide and particulate matter in the air has shown to trigger asthma attacks resulting in extreme use of medicines and increased hospitalization for children living next to busy streets. What’s more… it also puts kids at a dangerous risk of respiratory diseases.

Research shows that the impact of toxic air has a severe impact even on the womb, with pollutants leading to brain changes, developmental delays and behavioral problems after birth. Furthermore it is also believed that if a pregnant woman is exposed to high levels of polluted air, it could result in the baby being born with depression, withdrawal syndrome, aggressive and disruptive behavioral traits. What’s more…it also increases the risk of low birth weight. Pollution not only triggers minor allergies but also causes life-threatening diseases in kids which have tripled the cases of little ones being hospitalized with respiratory illnesses. In India, approximately 1 lakh premature deaths are caused yearly by air pollution. It’s about time strict measures are undertaken by the Indian government to curb this problem

When on a low carb diet for
weight loss, you need to focus on reducing your carb intake and consumption of
more fat and proteins. Only whole foods are allowed. The diet is for vegetarians
too.