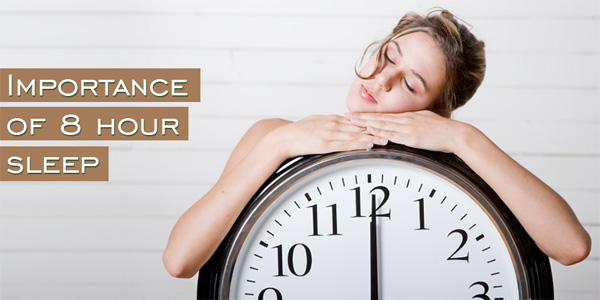 Sleeping for less than 6 hours a day and still having sufficient energy to perform day-to-day activities is not something to brag about. Just like, food, water, and oxygen, sleep too plays a very important role in the existence of life. Lack of sleep is associated with cardiac problems, obesity and even early demise

Research shows that most people need at least 7 to 8 hours of sleep to function optimally. Sleeping less and being awake for several hours during the day is not a testament to your physical strength and endurance but a silent indication that your health is deteriorating.

Read on to learn about the importance of quality sleep, and what happens when you don’t get it.

Lack of sleep disrupts the hormone levels which lead to a considerable increase in the person’s appetite, making him/her feel hungry even when the body doesn’t need food.

Adequate sleep is an essential part of a healthy lifestyle and can have a positive impact on the lungs, kidneys, metabolism and weight control. If you’re chronically sleep-deprived, it can also affect your immune function, disease resistance, sensitivity to pain, mood and brain function. Recent studies have revealed that too much as well as too little sleep increases the risk of premature death. Low levels of immunity triggered by lack of sleep slow down the body’s natural defenses against microorganisms, thus increasing the risk of contracting various infections.

What’s more… it also predisposes a person to developing serious illnesses in the long run like diabetes, heart disease, colorectal polyps and even cancer.

Sleep is also considered to be a natural stress reliever. Reduced stress levels helps in keeping the blood pressure under control.

Lack of sleep leads to vision related issues. The longer you are awake, the more visual errors you’ll encounter, and the more likely you are to experience tunnel vision, double vision, and dimness.

Each one of us feels fatigued, irritated, disoriented and distracted after an occasional sleepless night but if this habit persists for long, it can impact the brain functioning to a large extent. Your brain will fog which in turn will hinder your confidence levels and decision making ability. You may even feel lethargic and sleepy during the day, which could also make you accident prone at home, work or on the road. Given that a single sleepless night can have such drastic repercussions the following day, you can only imagine what continued sleep loss could do to your mind and body. Experts believe it could lead to memory loss as well as long term mood disorders like anxiety and depression.

Regular sleep disruptions are also linked to infertility in both, men and women. Apparently, if you don’t allow the body to rest via sleep mode, the secretion of reproductive hormones is reduced thus causing problems in pregnancy.

If you sleep less than 8 hours a day, make necessary changes in your lifestyle before it is too late