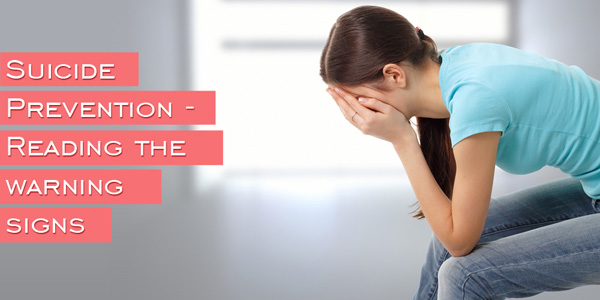 The suspected suicide of world-famous Actor/Comedian Robin Williams has once again raised the question of ‘how well our society is equipped to prevent such incidents from occurring in future’. Suicide Prevention is the need of the hour.

Suicide has since long been a very controversial subject which is why many have refrained from speaking about it in the past. . Hectic lifestyles and mounting stress in peoples’ lives, is sufficient for many have to suicidal thoughts. A suicidal person may not necessarily ask for help on his/her own but that doesn’t mean that help is not needed.

Suicide Prevention starts by identifying the warning signs and taking them seriously. We have discussed a few potential warning signs that a suicidal person may exhibit:

Talking about dying or causing self-harm – Being extremely vocal about wanting to die is one of the most obvious warning signs of suicide. Research shows that about 50% to 75% of people who attempt suicide tell someone about it first.

Suicidal individuals may also seem very eager at times to find ways to kill themselves by seeking access to lethal weapons. Buying dangerous weapons like a gun, knife, poison, harmful medications etc. is another warning sign to watch out for

Depression can also trigger suicidal thoughts in some cases. The first stage is when people lose interest in everything around them and become withdrawn from family and friends. In time their obsession with death increases to an extent that it becomes extremely obvious. For Ex- You may find some people writing letters, stories, poems etc. about their wish to die

Negative Feelings like helplessness, hopelessness, worthlessness, guilt, shame, self-hatred etc. can also be some of the reasons why people may want to give up their life. You may hear such people blurt words like “There’s no hope for me’, “I just can’t take it anymore, I want to put an end to it”, the world would be a better place without me” etc.

Taking care of unfinished business or putting affairs in order can also be a sign that the person wants to make sure that all his/her responsibilities are taken care of before dying. For Ex – Talking to people about the details of their ‘Will’, giving away prized possessions, making property arrangements for family members etc.

Self destructive Behavior – Tempting fate by taking unnecessary risks that could cost their life is certainly something that suicidal person would do. This is because such people basically lose any or all interest to live and thus do not value life. Alcohol/Drug abuse, reckless driving, accepting life-threatening challenges etc. are a few activities that they indulge in

Saying untimely Goodbyes – Such people sometimes tend to make unexpected calls and visits to loved ones and behave in a manner that indicates as if it’s their last conversation or won’t be seen again.

If you know someone who is thinking about suicide, never leave him/her alone. The best option would be to help them get professional help with a counselor/therapist.