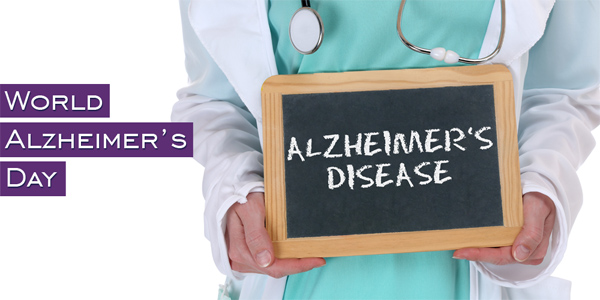 We have all heard about the term Alzheimer’s. But do you know what happens in this disease? Let us understand more about Alzheimer’s disease this World Alzheimer’s day, 21st September 2016.

Alzheimer’s disease is named after the doctor who first described it – Alois Alzheimer. It is a physical disease that affects the brain. During the course of the disease, proteins build up in the brain leading to loss of connections between nerve cells and eventually to the death of nerve cells. People with Alzheimer’s develop a shortage of some important chemicals in their brain, these chemicals help transmit signals around the brain.

Alzheimer’s disease is the most common cause of dementia. The word dementia describes a set of symptoms that can include memory loss and difficulties with thinking, problem-solving or language. Alzheimer’s is a progressive disease, which means over time, more parts of the brain are damaged and symptoms become more severe.

Who is at risk?

Most people develop Alzheimer’s disease after the age of 65. Above 65 years, a person’s risk of developing Alzheimer’s disease doubles approximately every five years. Research shows that almost twice as many women as men over 65 get Alzheimer’s. This disease may also be passed down by inheritance.

If you or a loved one is facing some of the below symptoms, then visit a doctor immediately. He may conduct initial checks or refer you to a specialist. Some brain scans show whether any changes have taken place in the brain.

The most common symptom is loss of memory. However everyone is different and unique and face different symptoms.

Some of the most common symptoms are listed below

The Alzheimer and Memory Clinic at Kokilaben Dhirubhai Ambani Hospital is a specialist clinic for people with neurological problems. We offer a comprehensive screening and care program for Alzheimer disease and other memory disorders, including neurology consultation, physical and cognitive rehabilitation, and psychotherapy.