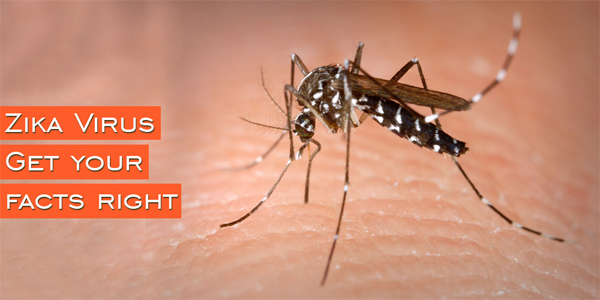 ZIKA Virus – Get your facts right

India has had a history of ZIKA virus attacks as early as in the 1950s.

ZIKA Virus is transmitted via the Aedes Aegypti mosquito which also carries dengue and chikungunya viruses. Since May 2015, the ZIKA infection has reportedly spread in 24 countries and territories of America.

ZIKA virus commands attention because it is known to trigger birth defects and neurological problems in newborns. Although in India, there have been no cases or medical emergencies caused by the ZIKA virus so far, we also cannot deny the fact that our fertile climate & environment is conducive for the growth and multiplication of the Aedes aegypti mosquitoes. Rising temperatures across India could work in the favor of this mosquito breed, making it easier for them to reproduce & spread the virus. As of now, there is no vaccine or medication to prevent or cure the ZIKA infection and considering the number of dengue cases in India, there is certainly a cause for concern because the mosquito that carries this virus actually thrives in our country.

Here are a few essential facts about the ZIKA virus/infection

If a person is infected with the ZIKA virus, he/she may have mild fever, headache, skin rash, muscle, joint pain, malaise and conjunctivitis that could last for 2 to 7 days. 80% of those infected never know they have the disease because of delayed detection & treatment owing to its resemblance with flu-like symptoms. Screening is thus important.

With no treatment or vaccine available, the only protection against the ZIKA infection is through awareness. Here are a few precautionary measures to prevent the spread of this virus:

Surprising as it may sound, Aedes aegypti mosquitoes that carry the ZIKA virus do not breed in stale water but use fresh water stored in flowerpot, cooler, water puddle etc. as their breeding grounds. Do not let clean water accumulate at any place in the house. These mosquitoes are highly active during the day therefore necessary measures should be taken to keep them away. Keeping your environment clean & hygienic is the most effective way to prevent this disease.

Use bed nets and mosquito repellents to protect yourself from mosquito bites. Cover the exposed areas of your skin with adequate clothing before venturing outdoors as Aedes Aegypti is a day-biting mosquito

Grow plants such as citronella, basil, lemon grass, lavender, mint, rosemary etc. in your home in order to repel mosquitoes

It would be favorable for people especially for pregnant women and women who are planning to bear a child in the near future to avoid travelling to affected areas such as Latin American countries like Brazil, and the Caribbean for some time until the situation is brought under control

The ZIKA virus is constantly progressing and with World Health Organization (WHO) announcing it as an international public health emergency, India needs to be extremely cognizant about the spread of this disease.