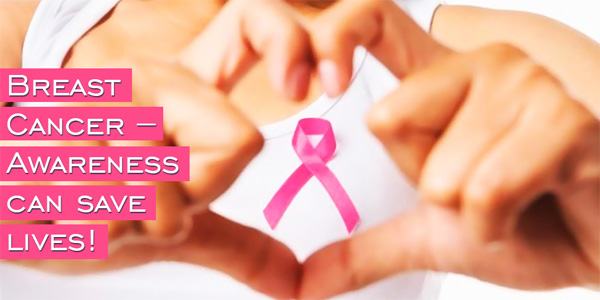 Breast Cancer – Awareness can save lives!

Breast cancer has replaced cervical cancer as the leading cause of cancer deaths for women in India and across the globe. It is a fact that many Indian women diagnosed with breast cancer know very little about their condition and do not pay much heed to getting immediate treatment which reduces the chances of their survival. Busy with handling the daily chores and sorting out family hassles, many women keep postponing their treatment and reach hospitals at an advanced stage whereby the cancer has spread to an extent that very little can be done to help them.

According to the World Health Organization (WHO) report, more than 60% of Indian women are diagnosed with breast cancer at stage III or IV. Experts believe 1 in 28 women is prone to develop breast cancer during her lifetime. Public awareness can be part of an overall approach to reducing these figures.

It will benefit the next generation of women who will be much more aware and willing to take the first step towards early diagnosis and treatment.

Having a family history of breast cancer increases a woman’s risk for developing this disease later in life. There is no control over genetics but some factors can certainly be controlled to prevent and minimize the risk of breast cancer: