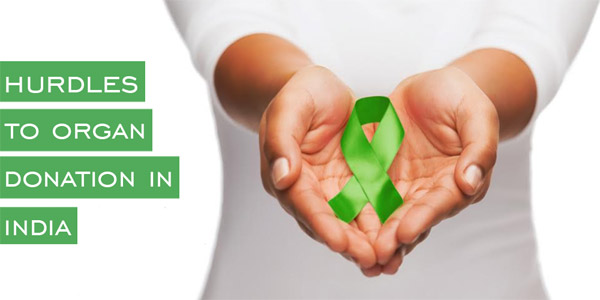 Hurdles to Organ Donation in India

India organ donation rate is one of the lowest in the World.

The plight of those waiting for Organ transplants is not something that is widely reported, yet it is a daily struggle for hundreds of people in India and countless others across the globe.

Of late an Indian Defence Aircraft was used as an Air Ambulance to fly a heart from Thiruvananthapuram to Kochi for saving an auto driver’s life. In spite of several public awareness initiatives that are carried out on Organ Donation, there is still a huge gap between patients who need organ transplants and potential donors. It’s not that there aren’t sufficient organs to transplant. Anyone who dies naturally or in an accident is a potential donor. In spite of the fact that India has among the world’s highest number of deaths from road accidents, there is an acute shortage of organs for transplantation

‘Very recently I had expressed my wish to donate my organs after death, to which the response from my elders shocked me to the core. They were absolutely adamant about this and wanted me to do nothing but change my mind, stating that without my organs my soul would be denied entry to heaven’.

This kind of mentality is one of the major hurdles to Organ Donation in India. If people continue to maintain this kind of attitude, the situation is likely to get worse in terms of finding suitable donors. While there is an ample amount of information on organ donation & transplants, there is still a great lack of education & many myths surrounding this subject. As opposed to common beliefs, all major religions in India support organ, eye and tissue donation and see it as the final act of love & generosity towards others. Also, organ donation doesn’t leave a person disfigured. Whether transplanted from a living or deceased donor, this medical procedure is conducted in a very professional manner by highly trained medical experts. During this procedure, the human body is treated with dignity, care & respect hence there is no question of disfigurement.

Finding a donor match is already a tough ordeal, to add to it, bureaucratic hurdles and lack of awareness makes the entire process of Organ transplant and donation even more difficult in our country. Those belonging to the lower middle class income group who wish to donate their organs either do not have sufficient information about Organ donation or are hesitant to take the next step due to lack of awareness. ‘Donor Card’ seems to be an alien term for many who live below the poverty line. Also, not all hospitals in every Indian state, city and village are sufficiently equipped to carry out the complex procedure of Organ Transplantation.

Even if the hospital boasts state-of-the-art infrastructure that is required to carry out complex transplant procedures, sometimes it becomes extremely difficult for doctors to convince the family members to donate the organs of their deceased relative. Even if the family is ready to donate organs, religious superstitions become impediments. Speaking on the same lines, Tina Ambani, the Chairperson of Kokilaben Dhirubhai Ambani Hospital states that India lacks way behind with regards to organ donation, as compared to other countries. She also believes that a change of mindset & attitude towards Organ Donation is the need of the hour. To read full excerpts from her interview to TOI,visit: https://timesofindia.indiatimes.com/india/Major-religions-view-organ-donation-as-charity/articleshow/48338140.cms :