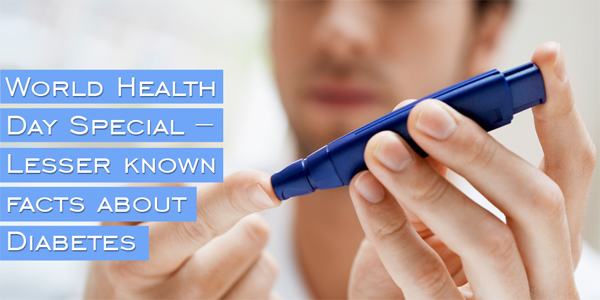 Today, Diabetes takes more lives than AIDS and breast cancer combined. With alarmingly high percentage of diabetic patients reported each year, India is on its way to becoming the diabetes capital of the world.

Diabetes is a chronic disease that triggers high blood sugar (glucose) levels in the body. Although diabetic patients can lead a normal life, uncontrolled diabetes can cause serious long-term complications. The saddest fact about this medical condition is that it cannot be cured, it can only be managed to make you feel better.

This year’s theme for World Health Day calls for a renewed focus on Diabetes, its prevention, control & treatment

With regards to the same, let’s unveil a few lesser known facts about Diabetes

In the absence of timely detection and treatment, diabetes can virtually damage all organs of the body. Featuring a wide range of relevant medical tests, The Basic Diabetes Package at Kokilaben Dhirubhai Ambani Hospital is designed to diagnose & treat such complications at the right time.